A forum for discussing topics relating to older MacGregor/Venture sailboats.

Is this about correct?
Top

What your looking for is neutral buoyancy not positive buoyancy, Im not sure about the other models but the X and M achieve neutral buoyancy with far less than the stated figure of foam installed in the bow and under the cockpit seats.

The trick is not to let the boat float too high in the water when its swamped or as stated it will capsize, at that time the water ballast is actually in the water so has no effect in stabilizing the boat, so the boat has this huge mast sticking up as a pendulum, so lower in the water reduces the pendulum effect and adds water resistance on the sides to stabilize the boat.

so how do I calculate neutral buoyancy? And what is the average specific gravity of a fully loaded MacGregor?
Top

warren631 wrote:And what is the average specific gravity of a fully loaded MacGregor?

Pretty close to the airspeed velocity of a swallow...

Okay, so to try to explain what he means by neutral buoyancy, which isn't floating (positive) or sinking (negative), but essentially "net buoyancy = zero"... You actually do need a slight positive buoyancy when you are done, so the boat will continue to rise back to the surface and not stay under and then sink. But that's semantics at this point. Mike's advice regarding capsize is great.

What happens is that the 3000 pounds on land become less as the boat sinks into the water. So you need less styrofoam. The net buoyancy of any item is the difference between its specific gravity (it's relative density) and the specific gravity of water (1.0) times the amount of water displaced. Your original calculation was slightly off because you didn't take into account the weight of the styrofoam and it's specific gravity (density).

So the fiberglass that makes up the hull...the specific gravity could be anywhere from 1.2 to 2.0 or something. For this example, let's just use 2.0 so it will be easy. That means the fiberglass is twice as dense as water. Water is the standard at 1.0. So ON LAND, a cubic foot of fiberglass weighs twice as much as water, or roughly 125 pounds. But IN WATER, it displaces 62.5 pounds of water, which then provides that much buoyancy (force UP) to our brick of fiberglass, so it only sinks or pulls DOWN with a weight of 62.5 pounds (the other half of the 125 pounds).

So as the boat starts to sink, it actually weighs less than when it was floating, as far as how much force is pulling down. Then you look at things like plywood in the bulkheads which weighs about 45 pounds per cu.ft. That adds about 17 pounds positive buoyancy per cubic foot. The plastics in the galley and cleats and cushion covers and on the fittings and etc, are close to neutrally buoyant, so they don't really sink or float. The foam cushions try to float. The screws and metal hardware and electrical wire try to sink at varying rates, adding to the negative number pulling the boat down. As Mike pointed out, you still have the mast and pulpit and such above water, so it counts as full weight pushing the boat down. Your Styrofoam tries to float or add UP force.

When all is said and done, the net result of all of the up and down forces acting on the boat as it sits in the water is hopefully slightly positive, pushing up enough to keep the boat from sinking and continuing to the bottom. It can't rise very high, because as sson as it does, the hull weighs more back in the air, and that pushes back down. The net becomes equal, neutral, and that's where your boat will float.
Top

warren631 wrote:And what is the average specific gravity of a fully loaded MacGregor?

Pretty close to the airspeed velocity of a swallow...

Would that be a African or European swallow???
Top

Thanks guys.....so how many Styrofoam blocks do I need? I think the previous owner removed all the old blocks. The few blocks I have found are rotted. I'm not sure what is under the cockpit seats because I can't access them unless I cut the seats. I just want to make sure I have enough buoyancy. Would an air mattress in the aft be a good idea?
Top

warren631 wrote:Thanks guys.....so how many Styrofoam blocks do I need? Saying that, I have so much stuff on the boat on a trip and otherwise I moved the waterline up 1 1/2 inches or so. Do I have enough foam now? Who knows for sure? I do usually have 42 gallons of permanent water containers and usually 8-12 gallons in additional containers and .... 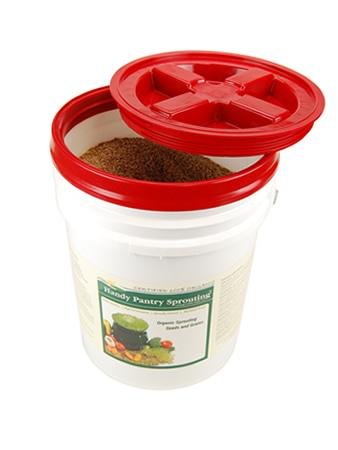 .... store things in 5 gallon buckets like above with airtight lids so all of those would add buoyancy depending on how empty they were.

In your case if you go cruising for lengthy periods of time the area under the V-berth could be valuable storage space,

So in the s and d, along with where Sumner pointed out up front, styrofoam is also in the space under the cockpit seats, and was also in the "cabinet" space above the galley. If you have those spaces full still, it would be good to add it to the front bow space at least. You'll just have to look thru the boat for unused space that is enclosed enough to fill with styrofoam.
Top

vizwhiz wrote:So in the s and d, along with where Sumner pointed out up front, styrofoam is also in the space under the cockpit seats, and was also in the "cabinet" space above the galley. If you have those spaces full still, it would be good to add it to the front bow space at least. You'll just have to look thru the boat for unused space that is enclosed enough to fill with styrofoam.

For what it is worth, I, too, became a little concerned about buoyancy when I first got my '98 26X back in 2003. Never one to leave something to chance, I started collecting the heavy duty Styrofoam coolers like Omaha Steaks uses, taped them shut with duct tape (after all steaks were consumed, of course

) and then shoved them back into the berth under the cockpit by the stern. My thinking was that they would certainly counteract the weight of the engine, if I became compromised with a boat full of water. I figured the space they enclosed helped to add to the buoyancy, too. Have three back there now. Had four at one point, but needed the space.
Top

So you are figuring on sinking her huh? I'd put more stock in PFDs and floatable VHF radios.
Top

RussMT wrote:So you are figuring on sinking her huh? I'd put more stock in PFDs and floatable VHF radios.

No. Buoyancy keeps the boat afloat - if you have enough. I'm just trying to figure how many Styrofoam blocks I need. I think I would need more than a floatable VHF radio to keep the boat up.
Top

RussMT wrote:So you are figuring on sinking her huh? I'd put more stock in PFDs and floatable VHF radios.

PFD's and a way of communicating with emergency personnel are clearly critical. I always (well, 90% of the time) wear my self-inflating PFD and take great pains to insure passengers have access to ones, as well. Since I sail on inland lakes and rivers almost exclusively, the cell phone with a waterproof case is standard equipment. I take pains with the buoyancy issue because I teach sailing and use my boat with many inexperienced sailors. I think they find it comforting initially to know the boat, itself, has positive buoyancy. Those "Omaha" coolers give me just that much more confidence that I am speaking the truth.
Top

My boat is so heavily loaded, I figure it's going to sink if I hole it. In fact, I've never owned a boat that I didn't assume would sink.

I wonder how many Macs have actually gotten a hole in them so they used the built in flotation.
Top

I think one just puts as much floatation as will fit. The guys who get in trouble are the ones who pulled styrofoam to make room for a water tank or something. I guess another consideration is how much heavy stuff one can pitch in an emergency...batteries, outboard, anchor, etc. All things one might want, but useless sitting in a sunken hull on the bottom. Do most guys just worry that they will head to their finger pier and see tight tie lines extending under water beside a half-sunken mast?
Top

In Australia they consider buoyancy an important factor in boating safety so they have standards to calculate how much buoyancy material you need in your boat: