1)What is the maximum horsepower I can put on a 2001 26 x?
2) What engine would be the best to achieve it?
3)What speed (with and without water ballast) can I expect to get?
4) would it have enough power to pull up a slalom skier?
Top

Not sure about "biggest", but... when also considering price, weight, reliability...

I went with an older Johnson/Evinrude 120 two stroke V4 (not the V6).
Super reliable, super common, and EVERYONE seems to know how to fix them.
It looks like it belongs there. If you go with a taller V6 or the even taller Mercury, it will hit the drivers seat when you tilt the engine up.
I am playing with the prop's but so far it seems to move well with the balast in, I have not tried a run without the balast yet.
One issue, the honda 50 was balanced so the steering was neutral while the motor was up, this engine weighs enough to cause the wheel to spin when the engine tries to flop to one side. I have bought a steering disconnect but have not put it on yet.

As I get the prop dialed in, I will start reporting the speeds.

Popeye Pete, I to am looking to add more hp to my 1998 26x also. I want a quieter 4 stroke, less smell, ability to take to lakes that have restrictions for carbed 2 strokes, plus my 50hp carbed 2 stroke just won’t idle / run dependably anymore. From what I’ve read 90 hp Suzuki at 341 pounds seems to be most common larger motor installed, the Yamaha 70 seems to be popular also, its very light and compact, but is only 1000cc’s vs Suzuki 90’s 1500cc’s. The Yamaha 90 which I’ve never seen or heard of anybody installing is 1800cc’s also comes in an ShoVmax version (no info on any power difference). Then there’s a Mercury 115 That is 2100cc’s in normal and xspro verions, thats about 355 lbs? I’ve never seen this one installed either, but is definitely the lightest with the most cc’s/ hp. There could be issues with motor clearance while tilting forward, weight of motor when tilted forward affecting steering while sailing (a disconnect is available to solve this). Strength of the hull doesn’t seem to be an issue, but most reinforce with plates etc just to be careful. There is no engine rating on the macgregor that I know of. I am looking for mid range torque for comfortable/ efficient cruising at around 20mph? Don’t think I would have many chances to go WOT unless was on smooth flat water. This is my knowledge so far, at this point I am thinking 90 Yamaha. I took some measurements of one the other day, haven’t checked my boat yet to see if it would fit. DI 2 strokes seem to work well also, but I want a quiet motor.
Top

I ran a 2003 suzuki DF90 (older 1950cc 400lb 4 stroke) on my X for a few years. I also had a 2003 honda 50 and 2015 suzuki DF20a on it. I have a yamaha 70 on my skiff. The yamahas seem to be a little smoother to me. The 90 is a great match to the x. My experience is stay at 9.9 or jump to at least 70. In general every few years manufactures come out with a new model, lighter, faster, supposedly better. I am a fan of the newest engineering if I can afford it and would take that over manufacture branding. Generally they try to outdo the competition and won't release something that has problems, so they are all fine. I like the just released T25 yamaha for another boat, but gave up on it ever coming out and bought a new T9.9 last year.

. The difference between 200 and 400lbs was not that noticeable. I don't think 20-30lbs up or down on a 90hp on a X would be noticeable at all. I could not fathom it before the install and only did it because a few others had the identical motor.

The seat interference is the cowling on the trim on the back of the seat, a little cutout of the back flap of the seat and that is taken care of. The mercurys in my opinion have a huge cowling. They look much larger in person than the others to me. There are a couple at my marina. I have not seen the new yamaha 90 in person, but the curve on it should keep it pretty compact.

Top speed should be about the same no matter the brand if they are producing the rated hp. My experience is the larger CC do produce the torque lower in the RPM range so you can run the same speeds at lower RPMs. I would put more importance on displacement and available props (large diameter and large individual blades) than weight of the motor.
Top

Are there any 60+ HP outboards that allow for manual pull starting?

One of the reasons I haven't explored an upgrade is because that's as big as it gets and still allow for manual pull starting if necessary. I am an old sailor, not a bold sailor.

Thanks SeaPup, your insight is greatly appreciated. I agree the newer mercury engines look huge, there is a little Boston whaler on the dock with a 40hp merc it looks like a 90hp. I was hoping the 115 pro XS was smaller that the ones I’ve seen, I did see a Yamaha 90, it measured about 25” above the pivot point, now thinking about it the pivot point to the top back edge would have been the right place to measure for clearance. The mercury 115 has an option for a lower geared and larger lower unit that can take up to a 16” prop. Would add weight also.
Top

I believe I am going to purchase a Yamaha 115 vmax (said to have about 140hp) It is 377lbs, 24lbs heavier than Yamaha 90, and 36lbs heavier than Suzuki 90, so close in weight. I have looked at Dimension drawings, and a mercury will not fit, but both Yamaha 90 and 115 are almost same size and should fit. Worst case would need to be spaced back a bit or seat modified/trimmed.
Top

One of the reasons I haven't explored an upgrade is because that's as big as it gets and still allow for manual pull starting if necessary. I am an old sailor, not a bold sailor.

The ETec is an amazing motor in that it can be pull started with a flat battery.

I have one of these on the boat and in all the cars. Wally World sells them for around $50.
Our motors will start with a motorcycle batter. This jumper started my truck on a cold single digit weather day. Amazing. 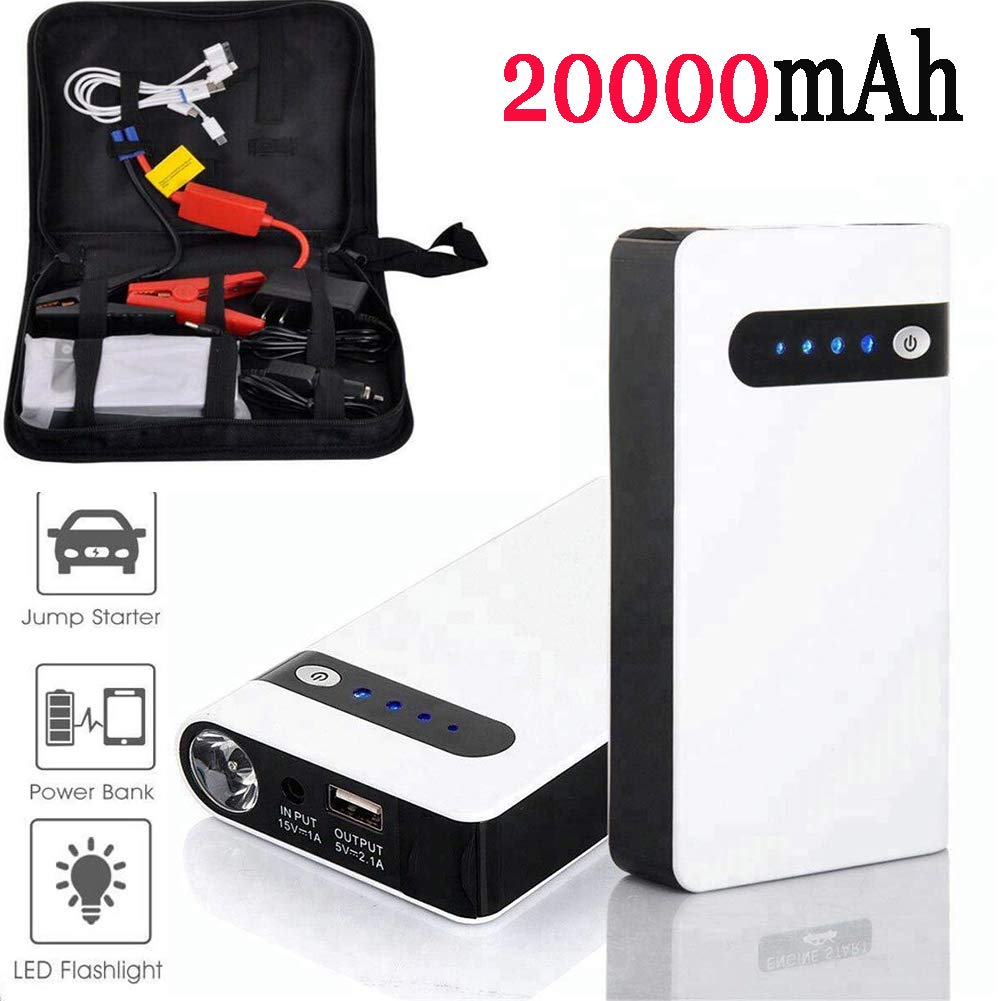 Ok, I'm confused (happens a lot). You mention your etec can be pull started, then immediately address using a lithium battery jumper (I use the Genius one).

dlandersson wrote: ↑
Wed Dec 11, 2019 4:55 am
Ok, I'm confused (happens a lot). You mention your etec can be pull started, then immediately address using a lithium battery jumper (I use the Genius one).

I don't have an eTec.
But I remember Matt S told of testing this with his. He was able to pull start the eTec. Even with a totally dead battery.
He went on to explain that the motor is able to make enough spark to start that way. I presume a magneto or some such thing. It's a very high tech computer-controlled motor, yet can start without juice. That's amazing to me.

For those of us with lesser motors (I have a Suzuki DF70), the jump pack is a good solution. Or those with weak backs.
Top

manuals state pretty clearly "The boat is designed for an outboard motor of no more than 50 horsepower. Do not use a larger engine".

Of course this may or may not have any consequence to you or the operation of your boat, and implications would likely be different in different countries and juristictions with rules and insurance policies that may be affected.

I always thought the threads on what is the minimum hp were interesting as well....
Top

DownSouth wrote: ↑
Wed Dec 11, 2019 9:26 pm
I know this has been mentioned in previous similar threads but some

manuals state pretty clearly "The boat is designed for an outboard motor of no more than 50 horsepower. Do not use a larger engine".

Of course this may or may not have any consequence to you or the operation of your boat, and implications would likely be different in different countries and juristictions with rules and insurance policies that may be affected.

I always thought the threads on what is the minimum hp were interesting as well....

I believe the restrictions stated in the manuals ( both X & M) had to do with warranties. On page 21, section 27 of the X manual it states to not put a motor larger than 50HP on the boat. Those who have much larger motors, in many cases, have reinforced their transoms.

Later models of the M were suggested to use a motor no larger than 60HP. My 2005

The reasons for the manufacturer recommended 50HP maximum was listed in their advertising brochures:

from MacGregor 26X web page, @ 2002
We limited the engine size to 50 hp for a number of reasons:
1) An electric start 50 hp motor provides lots of speed, yet is light enough so that sailing performance isn't compromised.
2) It is about the largest engine that can be started by hand, a nice feature if your battery goes dead.
3) It is about the largest engine you can pick up and move around. Try getting a 100 hp engine off the boat & to a repair shop.
4) Also, the heavier, higher horsepower engines really eat up gas.

This is outdated information, as newer 4-stroke engines have evolved. My 70hp Yamaha weighs essentially the same as 50s back in the early 2000s. Power packs can now be easily carried to start engines. The newer engines get much better fuel economy.
Top

Yes I was always curious over the start by hand comment I wonder how many outboards of 50hp could actually be started without power?
Top
Post Reply
24 posts