I am considering adding a battery state of charge monitor and wondered what others recommend? I am leaning towards being cheap and installing one of these:
http://www.amazon.com/gp/product/B013PK ... ge_o03_s00
A bayite $18 model, but might also consider a nice one called a balmer smart gauge which is highly recommended on phase and avoids most of the programming that can make them inaccurate:
http://www.pbase.com/mainecruising/smart_gauge

I also have one of these in the system, which so far has never been tripped:
http://www.amazon.com/gp/product/B00BEA ... ge_o03_s00
An energy core products lvd

The $300 Balmar is certainly the techiest option. The victrons seem pretty nice too for about half that amount, but not "smart".

There is an abundance of the Chinese import options for under $50. I like buying them from china then having a surprise when forget about it and they show up a month later

I saw the one you linked on amazon and have been considering it to play with. They look to be the best budget model currently. One thing to look for on the cheaper ones is that they count both amp hour or watt hours in & out. Many are one or the other depending on how you wire it, but not both.

I like the basic generic doc wattsons for under $20, They have been around a long time so there is a lot of info online about them and ways to mod them. I wired one to a 55lb thrust (50A continuous draw) trolling motor figuring it would heat up but after 15 minutes it was still cool. I found it useful when equalizing batteries at 15.5 V too. 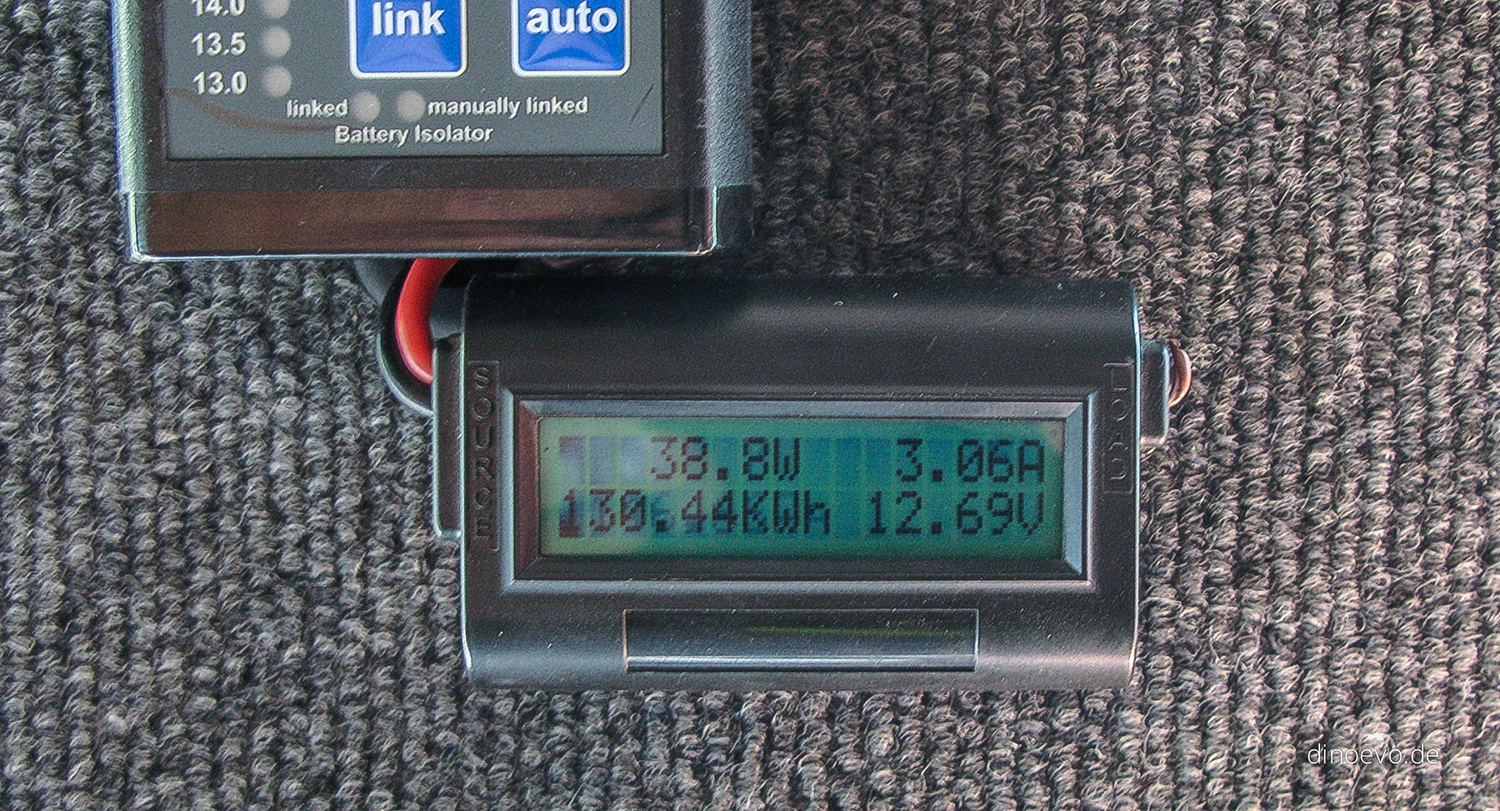 I picked up another under $20 model with remote shunt to be a little safer. The display cable had to be extended to make it usable away from the shunt, but otherwise it worked fine. I was a cool tool to watch my battery bank acceptance rate and outboard alternator output. According to it my DF 90 put 30A just above idle and a little over 40A into the batteries at 1800rpm. The DF 20 put out 12A at 2000 rpm, but soon as I went much over 2000rpm it would drop down to 3A and stay there, letting me know there was an issue and to not count on it charging my batteries. You can also see the voltage stay at 14.8 and watch the battery Amps quickly drop down as they reach their acceptance and end of bulk charge. You can program them to run a relay to shutoff the battery if you want, but they also flash when you reach your set values which was good enough for me.

Then I went big and spent $35 on a remote one

Its a little nicer looking but the nicest thing is its wireless between the shunt and display. So all you need to do is put the shunt on the battery and then put the display anywhere you want, like next to your switch panel. I have only used this in in the house so far, but seems to work just like the others. 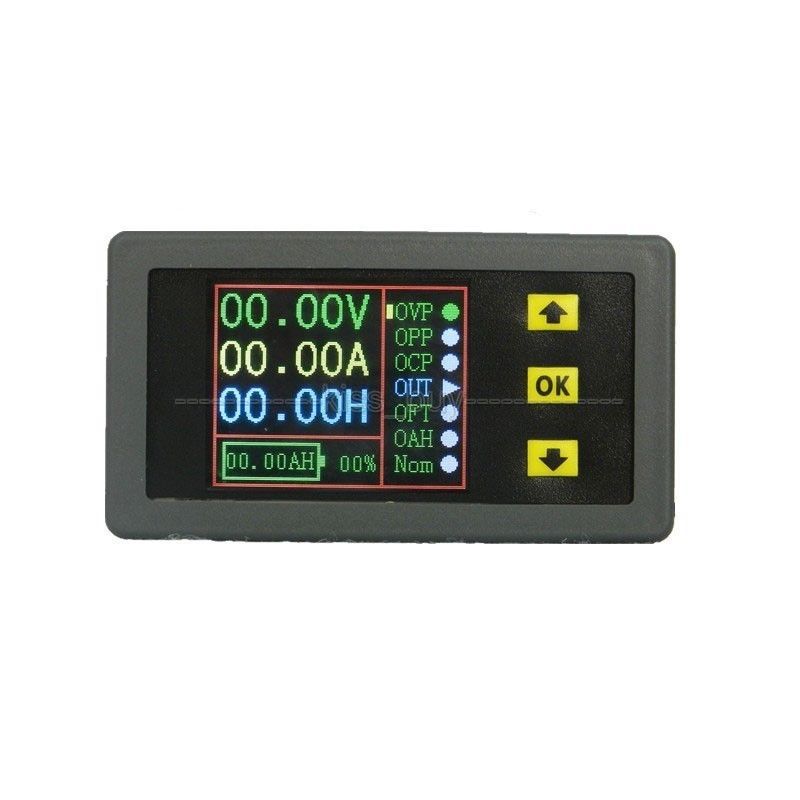 Unless its already out there...
Top

I'm very interested in what everyone is using. Right now I have no way of knowing what condition my batteries are in without using my volt meter (I do have one on board). My brother-in-law recommended a Xantrex Link Pro like this one http://www.amazon.com/gp/product/B001E4 ... PDKIKX0DER. However, he has a 40 foot Nauticat that he sailed solo to Hawaii. He’s got a bank of eight gel batteries. I’m willing to pay for it if it’s worth it. Is this one overkill for a boat with two batteries that is mostly used for overnighters on the weekend and will hopefully take us for a week long cruise this year?

Any links for some you like. I"m interested in remote shunt models and also the wireless one... ... I use the volt and amp meters shown above in both boats but they are now hard to find and don't give any other info. I did buy a cheaper Chinese volt meter for under $15 to read the two batteries that can be switched between a 24 volt series bank (trolling motor) or a 12 volt parallel bank (house loads) and it worked on the Bahama trip fine but now sometimes seems to about double the indicated voltage at times and one segment doesn't work

Great info Seapup! I agree with Sumner do you have a link to your $35 wireless shunt and remote meter?
Looks like their are a few options for app based remote meters with wired shunt, but I didn't see one cheap. The link I provided to the cheap one is only one way.
I have an 'add a battery' kit with a switch that separates the house and start batteries, so as long as I don't switch to "both" my meter wired to the house battery should work properly for load monitoring the house battery. These units are cheap enough I may put one on the solar and engine input side to see how recharge is going as you demonstrate.
Top

Had a Davtron volt meter left over from a Avionics upgrade. Put a DPDT with center off switch on it so it could read both batteries independently.

What should I do? I would like to put up a display that tells me how my batteries are doing.

(what the heck is a shunt?)

When wiring two separate 12v batteries into an A/B-toggle switch and then to a meter - do you need to run BOTH pos and neg wires from BOTH batteries? ... or can you just use one neg wire.
Top

BOAT wrote:Sumner, I have no idea what you are saying - but I am trying to figure out how to monitor my batteries with some sort of display. I have been trying to figure out how to do it for over two years! Then you come along and say you have been doing it forever with Chinese "stuff" and when you talk about it all I hear is words I don't understand.

What should I do? I would like to put up a display that tells me how my batteries are doing.

(what the heck is a shunt?)

Hey sent you a PM about your traveling.

As far as the info above you need that wasn't me with the long, very good post above, I'm just looking for more info like you are

In the 'old' days when you had an amp meter all the current for everything you wanted to read went through it. If it went bad it could burn your car up so they quit using that time and went to just a voltmeter for info in the car and a volt meter will tell you battery charge level but won't tell you how much elect. is flowing in or out of the battery (current--in amps).

Since we might still want that info they have a different type of amp meter that uses a shunt....

... the current you want to read can flow through the shunt which is place on the negative cable going to the battery if you want to read all loads and is very safe. It in turn sends a signal, that is actually the voltage drop across the shunt to the amp meter (which is actually a volt meter with an amp scale on it). Since we are sending a voltage to the meter and not running all the amps through it we only need a small wire. The meter interprets the voltage signal and gives you the amps that are flowing at that time.

A meter can also do more if it is more sophisticated. It can keep track of those amps over a time period going into the battery (charging) or out to the loads and tell you how much your battery is charged and totals for the amps in and out depending on the meter. Above (bottom left arrow) is the shunt in my wiring on the Mac and it sends the signal to the amp meter in the other picture. If you want to measure amps please get a meter that uses a shunt and don't install one where all the amps flow through the meter,

When wiring two separate 12v batteries into an A/B-toggle switch and then to a meter - do you need to run BOTH pos and neg wires from BOTH batteries? ... or can you just use one neg wire.

Only one negative as the negatives on the batteries should be tied together. Also if you run the volt meter to the common terminal on the A/B switch you will see the combined voltage or the voltage of whichever battery has been selected by the switch,

A shunt is a parallel pathway for the current to cross, with high resistance compared to the low resistance of the main conductor. It is needed to measure amperage flowing in a high current circuit, so that only a small current goes through the meter. It seems like you would want one on each battery, unless both batteries are always on together.
Top

Okay, thanks Sumner - I will get a "shunt" - (might take me a while to figure out how or what kind but I will defiantly do that).

I'm sort of an 'off the shelf' kind a guy when it comes to electric stuff so it takes me a little longer.
Top

I like the Blue Sea Systems State of Charge meter. Model 1830
It's on the top of the long MODs list.
I so far have installed the electrical system with Blue Sea's products so far, 2 Fuse Blocks, a 360 Switch Panel, and MRBF Terminal Fuse Blocks on each battery.

So I need to buy this, right? 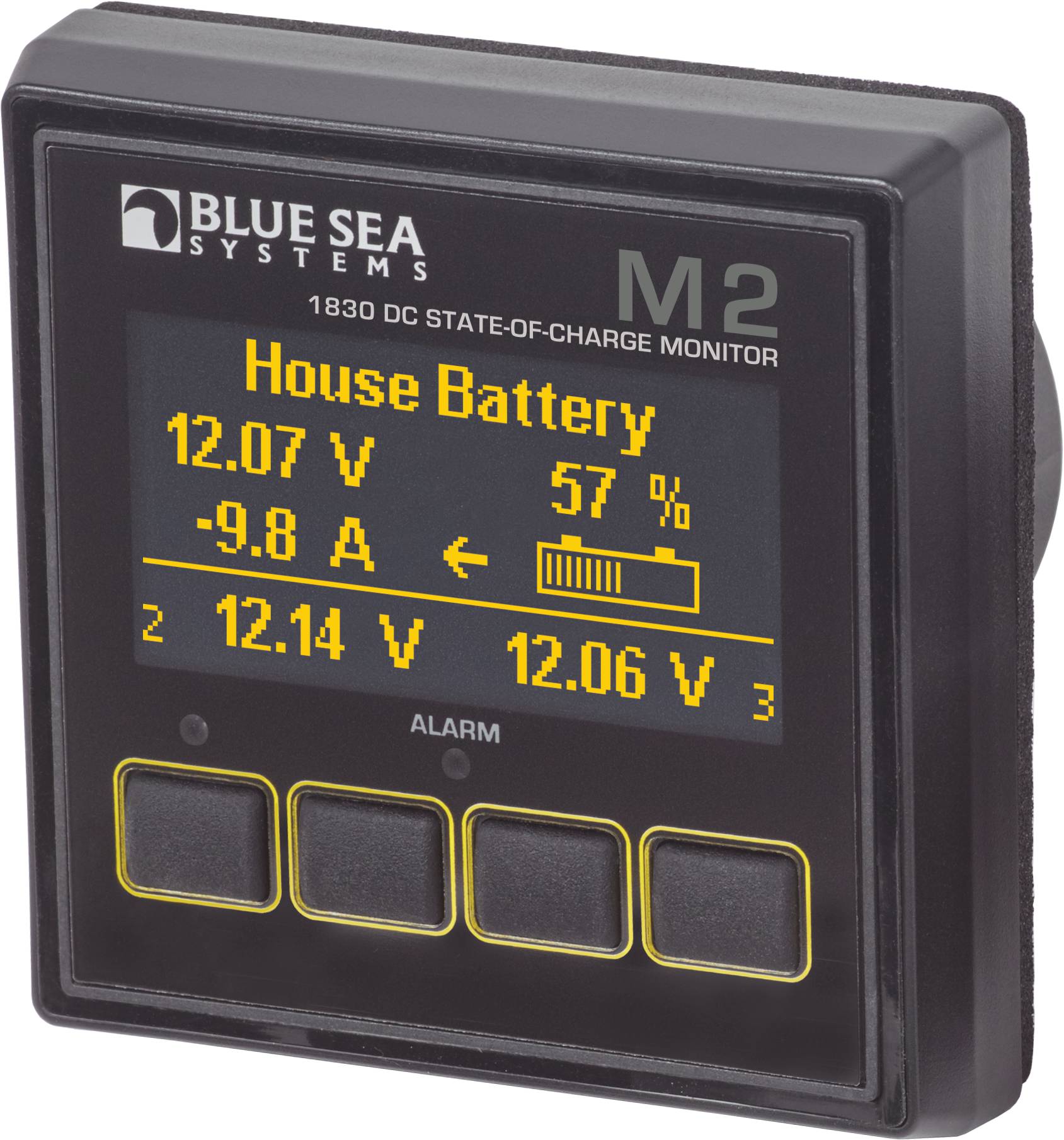 BOAT wrote:So I need to buy this, right?