A forum for discussing topics relating to older MacGregor/Venture sailboats.

As a 25 owner I've never been very happy with the mainsheet system. Adding a vang this season has helped, but it still bothers me that I can't get the boom farther to windward without wailing on the mainsheet and tensioning the leech of the main. That said, even the used travelers I've seen on eBay are a significant percentage of what the boat is worth.

So I had one of those "sudden epiphany" moments when I was helping one the high school sailors I coach rig her 420 dinghy. She asked what her rope mainsheet bridle was for and how to attach it. I told her "you attach one of your mainsheet turning blocks to it ...

... so that you can sheet the main closer to centerline."

Here's what it looks like on a 420 (blue dyneema line on mainsheet block): 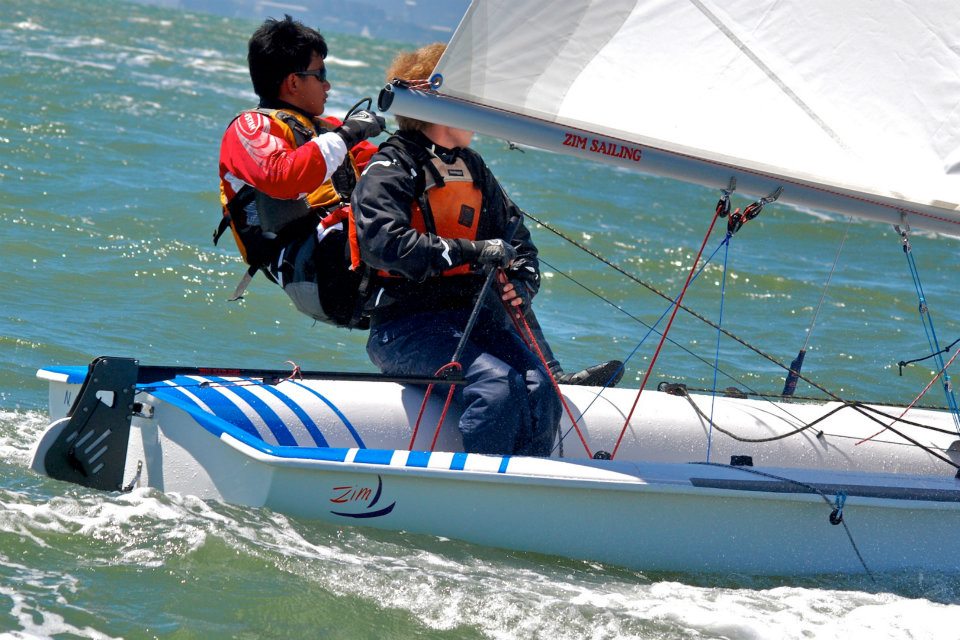 Has anyone tried making a rope or dyneema bridle and sheeting to that? It won't get you above centerline but it will get you closer.

Building on that, I realized that it probably wouldn't be too hard to turn the "bridle" concept into a full-on traveler. This would be cheaper than a metal bar and with the advantage of being able to clear the tiller. Turns out someone's already tried it. Here's a photo from a San Juan 21 website:
https://57603611-a-62cb3a1a-s-sites.goo ... edirects=0

Basically, there is a single rope traveler stretched across the cockpit (dyneema is probably better for friction and stretch), and the "car" is a block that rides on the traveler. Shackled to both sides of the car are adjustment lines, just like a traditional metal traveler. This would allow for full windward sheeting at a fraction of the cost and hassle of a metal traveler bar. I'm thinking of then routing both the mainsheet and the traveler controls to the skipper's position as shown here:
https://57603611-a-62cb3a1a-s-sites.goo ... edirects=0

Whaddya think? Has anyone tried either of these?
Top

To get the boom closer (or beyond) the CL, I use a second main sheet system. The old one that I kept (of course) after I upgraded to a ball bearing fiddle block set from BWY is simply clipped to an eye strap that's already on my coaming for the bimini, or one on the lifeline rail for more 'out' with less 'down'. I slacken the vang and control the 'down' with judicious use of the two main sheet system - more of the main system for more leach tension, and slackening that for less, with the spare one to the coaming or rail basically controlling the horizontal position of the boom. Snap shackles on each end allow quick installation and removal, and switching sides for tacking.

Most of the time I only use the main system, but if I really need to pinch, the other one is there, hanging in the head where I keep all such rigging that needed for various puposes and easily accessed, like preventers and such.

Oh, and the second main sheet system is handy for DDW sailing, as the working system doesn't have enough travel, so I just clip on the second one, tension to unload the main system and unhook it from the boom, then let the boom further out. I could replace the main sheet, and will eventually, but having the second system attached further out also holds the boom down with less load on the vang (or none, as I often don't need it). And I use a preventer. Because I don't like getting hit in the head by the boom, especially when someone else is at the wheel. And not paying attention. Which happens a lot.

Yeah, I've seen the dual mainsheet systems, which look like they work well too. My issue is that I want to race the boat in a local series that uses windward/leeward courses, which means a lot of tacking, so I'd like to be able to tack with a minimum of reconfiguration. On the other boats I race on it's tack, trav up, and we're off again.
Top

Then I would just rig the two main sheet systems to the coaming. To tack, slacken one as you tension the other. Or if beating to windward, you may not have to do anything but tack, if the two are adjusted properly. You could even hold the boom dead in the center, without doing a thing.

A traveler works good. This one is not too expensive. I converted it down to a 3 to 1 and it works gret.
Top

Sisu,
"My issue is that I want to race the boat in a local series that uses windward/leeward courses, which means a lot of tacking, so I'd like to be able to tack with a minimum of reconfiguration."

I thought the 25 was originally setup similiar to Classic models, where the mainsheet was mid-boom and centered on the flat area at the cockpit area. This is a easy place for either a short or long traveler. I have the short one on my D and it works great. A rope traveler would clutter up the entry into the cockpit and deck work here. If as I suspect the original mainsheet on a 25 was at the aft end of the boat a rope traveler may be great there.

If you are going to race a traveler is essential to get the most out of the boat.
Top

I have a Mac 25 that I added a traveler to. It was expensive but well worth it. There is photo at the link below. https://forums.sailboatowners.com/index ... 002.22477/
If you go to YOU TUBE and search JEANNEAU 349 and study the videos you will see that there mainsheet setup does the
same thing that a traveler will do, but much cheaper.
Hope this helps you.
Top

Mac 25 wrote:I have a Mac 25 that I added a traveler to. It was expensive but well worth it. There is photo at the link below. https://forums.sailboatowners.com/index ... 002.22477/
If you go to YOU TUBE and search JEANNEAU 349 and study the videos you will see that there mainsheet setup does the
same thing that a traveler will do, but much cheaper.
Hope this helps you.

The mainsheet on my Hunter was essentially the same thing, as the lower block was mounted to an arch. That keeps the vertical distance between the blocks very small, so sheeting it hard to the centerline actually brought it close to the centerline. It also had a traveler, but I seldom moved it off the CL. Didn't need to.

That bridle looks like an interesting idea, even for an

. I could easily whip up a bridle with spliced ring at the apex to give it a try. Just for fun.

Edit: Although thinking about it a bit, that bridle may be completely in the way for most sailing. I use two main sheet systems sometimes, but only when I'm not going to be tacking for a while, as when they come off the rail, they're kind of in the way. Unless they're close enough to the cabin that I can still reach the clutches and such. Hmmmmmm.

Lucky me has a friend (yes i know thats strange) that is wrecking a boat that has a nice traveller system on it, needless to say I called dibs on it.

It will need some refurbishing but the bones are there, next issue is how to fit it, cabin roof is tempting but the shorter pivot to goose neck will effect the sheeting angle
Top

[quote]cabin roof is tempting but the shorter pivot to goose neck will effect the sheeting angle/quote].

The gooseneck angle isn't the issue, as this is related to the length and the positioning of the traveler. Neither is the stress on the gooseneck. The considerations are cluttering up the cockpit, ease of use, overloading the boom strength, as in mid-boom sheeting. Never have seen a traveler on the back of X or other Macs that also run a bimini. I have done a traveler over the cabin on my X and it worked great, but recently bent my boom in a accidental jibe. Nothing is perfect.

I made up a poor man's traveler. It consists of two extra folding padeye D rings. I replaced the original padeye that came with my S (has mid-boom sheeting) with a folding style so it would be out-of-the-way. I bought two extras, and just mounted them one left and one right of the companionway hatch in line with the original on the seat top. It isn't perfect, and the only reason I did it was so that if I was on a long tack I could move the main sheet higher for a lengthy period of time without having to put a traveler in the way. It's also convenient for moving the boom out of the way when at anchor. I haven't had opportunity to use the new system for sailing on a long tack but I plan to soon. I'll report back once I have some results.
Top

We've been using a bridle for now. Any more serious mods will happen over the winter. So far in racing our pointing has been decent - I think our keel and rudder, which use foil sections modeled on a Home Depot 2x4, are far more detrimental to our upwind performance than our main sheeting system. Thinking about building a new rudder over the winter and fairing the keel.
Top