I just had a 2nd axle added to my stock steel 26X trailer. They made new fenders across both axles but unfortunately they are a little tight to the boat (the boat does sit on the trailer but it has deflected/warped the fenders a little bit)

The trailer shop is about an hour away so its not practical to have them take a look at the boat on the trailer. For anyone that has attempted this, if you have any suggestions for proper measurements it would be greatly appreciated. I know generally speaking its a tight fit. I also think these new fenders were mounted higher than the stock fenders and this might result in an impossible position?

You might try adding another 2X4 on top of each trailer bunk. This would raise your boat 1.5 inches. This might give you enough clearance. Check before doing this as it is a bit of work. The wood would then have to be recarpeted. It would also increase the distance you have to back down the boat ramp to launch your boat. We only have about a half inch of clearance between boat and fender. We added the extra wood to the trailer bunks when we bought new axles for the trailer but we bought drop down axles that were slightly longer then the original axles. They might be able to move the fenders out enough to clear the boat but fenders need space so as not to hit the tires when bouncing down the highway.
Top

My new fenders also were way too close to the hull. I installed dock edge bumpers to the edge of the fenders and all works well.
Top

My boat has just 1" of clearance between fenders and hull, but she always manages to center herself and settle in when I pull her out of the water. The tight clearance hasn't caused any problems.
Top

We as well experienced the same problem. it took me 3 attemps to center the boat onto the trailer without leaning on a fender the first time. Our fix was to remove the fenders and re-drill bolt holes in mount brackets approx 1/2" out. May not work for all mounting systems. The other option would be to redrill the fender holes, but they will show.
Top

Ris, great suggestion - thanks. Unfortunately the fenders are welded on otherwise I could have adjusted them myself. (Chinook, 1" is probably as good as you can expect - even the stock trailer has very little clearance. As you say it always settles into the proper place)

I called the shop today and they are being very good about attempting to correct. Hopefully we can get enough clearance by lowering and widening them a little, and if not I bet an extra 2x4 on the cradles should do it.

I'll let you know how it goes.
Top

Got the trailer back today with the fenders lowered an inch and out by 3/4".... Still impacts the boat a little bit. So I will have to raise the bunks up. Probably a good idea to replace that 20 year old wood anyways...

Question - do you think I could get away with not raising the bow cradle bunk? I guess this will put the three bunks a little out of line but it would also prevent having to back the trailer up any further into the water for launching.
Top

I'm thinking it would not be good to raise only some of the bunks. There is a lot of weight pressing down on just a few points, and you might upset the distribution by only raising the middle and aft bunks. Good luck with removing the old bunks. The bolts attaching them aren't stainless. When I rebuilt mine, I sheared off most of the bolts. For the rebuild I used stainless steel Tee nuts, countersunk into the top of the new bunk material. I used plastic wood, the kind decks are made from, instead of wood. Stainless bolts from beneath, screwed up into the Tee nuts, allow me to remove the bunks without having to tear the carpet off. I removed the rebuilt bunks recently, before getting the trailer repainted, and I was able to remove each bolt without any trouble.
Top

Seriously, I had the same problem and it is easily solved' 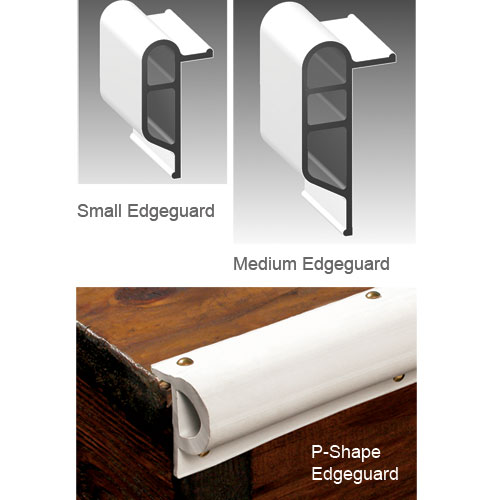 . I installed the small profile edgegaurd on the top edge of my fenders. Protects the boat finish and also acts as a guide.
Top

Well, my problem is the boat is pinched on both sides by the fenders, there's no room at the moment. If it works with the raised bunks I will put some kind of soft guard on the fenders for sure (even if it's just some carpet)
Top

Okay so this weekend I rebunked with 4x4's. Now there is a small gap between the boat and the fenders over the front tire, and the boat and fenders are just touching over the rear tire with no fender deflection.

I'm tempted to put some carpet over the edge of the fender and call it a day. Does anyone think this is a bad idea?

On a related note, I notice that the middle (angled) bunk only touches the boat at the sides,not the middle. Is that expected? Is the lower middle part meant just to catch the centreboard if it falls?

bobbob wrote:Okay so this weekend I rebunked with 4x4's. Now there is a small gap between the boat and the fenders over the front tire, and the boat and fenders are just touching over the rear tire with no fender deflection.

I'm tempted to put some carpet over the edge of the fender and call it a day. Does anyone think this is a bad idea?

While it's desirable to have a decent gap, the rest of the hull sits on carpeted bunks, so I rather doubt light contact on carpeted fenders would be a problem.

bobbob wrote:On a related note, I notice that the middle (angled) bunk only touches the boat at the sides,not the middle. Is that expected? Is the lower middle part meant just to catch the centreboard if it falls?

That's how mine contacts. The bunks are not rounded, but the hull is to some extent in that area, so it's naturally only going to bear on a reduced area. And the center bunk will catch the CB if it's allowed to sag. Unless you hit the brakes much too hard during the "Mac Bump" procedure, after forgetting to raise the CB all the way after loading onto the trailer. It WILL fall, and it WILL end up jamming against the bunk so it can't be raised without dropping the hanger. Which was a good excuse to replace the CB line anyway, so it all worked out in the end. I have a short length of angle fabbed to bolt to the front of that cross brace with a short 2x4 on it, so it can't get caught again. Gotta get to installing that.