Just wondering what the advantage is in adding 25kg (55lbs) of lead to the daggeboard?
Top

It would help the righting moment, but remember, it also adds stresses to the daggerboard well. I'd check for any cracks inside the well and if it's been reinforced. Of course, the daggerboard can't be the original one as it has to be beefed up to support the extra weight.
Top

The dagger board was designed to break rather than damage the keel trunk. This subject has been hashed on this board for years. The only correctly engineered weighted board project was the Black Pearl. The hull, ballast, keel trunk was reinforced handle a 300lb bulb keel dagger board at the factory. The performance of that boat was significantly improved in regard to righting moment and sail plan. Anything less in weight was nominal with regard to heel and performance. The significant increase in board strength to handle the weight at the end of the board created more potential for damage to the keel trunk with little effect on performance. The distribution of ballast weight vertically vs a bulb or wing keel was considered by most as ineffective. I believe the consensus by most engineers on this forum was the math just doesn't work as intended. BWY's project boat 2005 La Perla Noir was the exception to the rule. Unfortunately MacGregor never built another. http://bwyachts.com/laperlanoir.html.
Top

Concur anything less than 200 lbs would be pi$$ in the wind...so to speak.
Ix
Top

A retractable or swing wing on each side of the boat would do more than 200 pounds in the dagger board and it would not add so much weight. It's also easy to control wings with simple rigging you can control from the helm. This is why all the modern race boats have wings now. Since the main goal of the factory boat is to be on a trailer that any car can tow I think a future MAC M boat (if the factory stayed open into the year 2030) would be an M boat with retractable wings on each side to deal with high wind. That would solve the issue of heel without adding any weight and the boat would maintain it's fast speed under power. The wings would also be like the DB so they break before they break the boat. That would save the boat from all the structural damage risks associated with adding heavy planes to a thin hull.

The future will never come - the MAC is no longer in production and is never coming back. 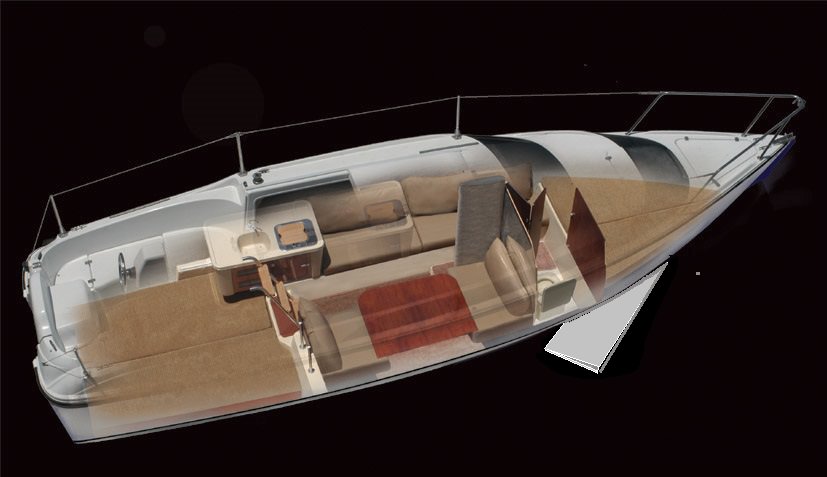 In the years following the building of the 2005 La Perla Noir, which we called a prototype boat, we found the following results of the heavily weighted keel. Remember that this was a custom built boat, daggerboard trunk heavily reinforced, permanent ballast reinforced, and board reinforced to be able to accommodate the heavy board.

Sailing performance in winds over 15 knots the boat was greatly improved. We sailed with the board down and full water ballast. We did not need to reef as soon so we could carry more sail area and point higher in the heavy winds. The boat performed Super!

Raising and lowering, this aspect of the boat was, in my opinion, a pain in the puttee. We had larger self tailing winches, and 17 to 1 block on the daggerboard line. We would then need to bring up a battery run drill motor which we put on a special bit that would fit into the winch so the motor could crank it. This motor was heavy and awkward to use, still slow to bring up the board. Personally I did not like this. I like the ability to quickly raise the daggerboard with a tug on a line and be done.

If you are thinking of weighting your board, it means it is going to be heavy and slow to raise! A worry in regards to the trunk too. I think, but i don't know for sure, that Roger heard our report of the performance of this boat and thought that for a beginner it was not worth the hassle of the heavy board. We tried in 2013 to have him make a series of boats with weighted boards and a better raising system, but it was too late as his mind was made up to retire. He is doing well, had dinner last month with the two of them. Happy and healthy I am glad to report!
Top

bwygirl wrote: Sailing performance in light air the boat did not do as well as we had hoped it would. If we sailed no water ballast the boat sailed much like stock boats, but maybe less speed due to the bulb. If we sailed with full water ballast and the board down it was slower than a stock boat.
He is doing well, had dinner last month with the two of them. Happy and healthy I am glad to report!

Here in Southern California, (where the boat was really designed to sail), we have mostly light winds all but three months of the year and no one goes out in those three months in any trailer boat. I need that light wind performance to navigate the waters here in So-Cal. The first time I sailed the M boat tied up at Rogers dock I was amazed at it's acceleration in light wind and that's what sold me. I spent WAY too many hours rolling back and forth at 2 knots trying to cross the San Pedro Channel in less than 8 hours waiting for the afternoon winds to arrive. Been there, done that more than I wanted already. On the last trip to Two Harbors we had NO wind departing Long Beach at 11 A.M. crossing to Catalina and cruised along under power at a very comfortable 15 knots for about an hour putting us halfway to Catalina and then at 12 P.M. right on time the Pacific breeze picked up and we sailed the rest of the way at 5 knots arriving at Two Harbors before 3 P.M. and the wind was really blowing at 18 knots across the Isthmus by the time we got there so I was really glad I arrived early. You just can't do that in a regular keel-boat - and that's why I do not want to turn my MAC into a regular keel-boat. Six other very large keel-boats departed the Los Angeles breakwater at the same time we did yet we were secure on our mooring and eating lunch and drinking wine for a good 2 hours before we saw them finally round Bird Rock.

The lead sinker on the keel would just be something I would be trying to get rid of for 80% of the sailing time and in that 20% where we get caught in wind over 18 knots we reef, or use the motor. That big motor is the best safety feature anyone ever put on a sailboat - it get's you out of trouble fast. I would be afraid of that much weight on the keel when running - what did the Black Boat do with the wind?

I would not have added the keel either if it were my choice.
Top

La Perla Noir would sail upwind to about 30 degrees and in 15 knots of wind, or so, would go about 6 knots. Off the wind would go faster, of course. Its that true upwind performance that speed is difficult to get. And, while we had a GPS on the pedestal I was not looking at the speed when sailing.
Top
Post Reply
8 posts • Page 1 of 1