We live in Central Florida and right now Irma is about 90 miles south of us. The Jill Kristy is under the pole barn, with the tongue dolly wheel a foot deep in the sand so the front will not move. We also filled our 30 gallon palastimo tank in the bow of the boat. We are supposed to have winds constant over 75 miles per hour starting around 8 pm until 8 am on Monday. We are to expect wind gusts over 90 mph. The eye of Irma will pass over Sumner's non Mac boat in about 4 hrs. Sumner I hope they tied her down real good. They just had wind gusts in Naples of 132 mph. Hope all the other Florida Mac folk are doing well.
Top

Good Luck Ris. Mine is tied down in the back yard with mobile home anchors and ratchet straps.
Top

We recently had 70knt winds, the good news is the boat on the trailer didnt move and I had no water or anything in it.

It wasnt even tied to the trailer, but i figure if the wind can push it through / over the trailer guides it would be all over anyway.

Best of luck and be safe, a boat can be replaced at the end of the day, a life cant
Top

Ponaldpe, the weather guy said this storm is now moving a little eastward. You might end up in the eye of Irma about 12 or 1 am. Just watched my neighbor lose a few shingles. Our metal roof seems to be holding.
Top

Stay safe, ris. The boat can be replaced. The crew, well, just stay safe is all.

ris wrote:Ponaldpe, the weather guy said this storm is now moving a little eastward. You might end up in the eye of Irma about 12 or 1 am. Just watched my neighbor lose a few shingles. Our metal roof seems to be holding.


Yes the track if stays is headed right for my house. I have done all the I can , and feel we be alright . My little fleet of boat and the camper are tied down, windows boarded up, and coffee in the thermos . The anchor is out hatches locked .
Top

Looks like the eye went past the yard a bit ago about 20 miles to the east. Hope to find out something about the boat the next day or so?? For the last 5 years I've only had one of the 6 solar panels mounted to avoid damage in a situation like this. Last spring I put them all on and hooked them up. I'd be happy though if all we had to do was replace them.

You guys stay safe and we will be thinking of you,

Irma passed north maybe some 40 miles. Only had tropical storm winds here many trees went down been without power for 6 days. Went to the boat before and brought back solar panels, battery, charge controller, fans Engel fridge and some led lights. Been getting by so far pretty good. The BVI and St Thomas got hit hard.
I been thinking if it's a good idea to fill ballast while on the trailer to keep the MAC from blowing over?
Hope everyone is ok in the path of this storm.
Top

Hey! You guys keep telling us how you are doing. We want you guys to be all right.

Will it take long for them to make all the lights and power come back on so you can use your microwaves and stuff? How long does it take to fix everything after a hurricane?
Top

We lucked out as it sounds like only a tree went down at the yard and didn't hit any boats. Still don't know about my solar panels but will by tomorrow or next day. I only worry about them, as need at least one working to keep the batteries up so the bilge pump can take care of nuisance rain water. The friend that will check that lives closer to the path of the eye than the yard and says there is no real damage in his neighborhood except for small tree limbs.

Hope everyone else fairs as well,

Made to the other side a lot of tree down ,no power, or internet, road flooded on one end power line down on other end. House, autos, my small fleet of boats all did good. It turned and came rift over the place here cat 2 winds only real bad for about an hour. Pleased we did as good as we did.
Top

EDIT: Added pictures.
We survived here in Lakeland with nary a scratch. The fence posts got pushed over a little, so a few of them are listing to port slightly. But no other damage to our place or to Grace Full One. Mast was on the ground up against the fence before the storm, all other loose stuff removed (like temporary solar panel and rudder), front wheel down in a hole to prevent rolling, rear blocked up for wheelie pevention in case cockpit filled, and hatches latched shut. Checked on it during storm and it didn't even shudder.

On the "what I learned" side of things, my plan was to (partially at least) fill the water ballast tank. I placed blocks under the "v" shapes of the trailer to help support the extra weight so it didn't rest entirely on the trailer springs and tires. I filled the ballast tank with a garden hose, and the admiral, who was managing the spigot, calls out "did you know the water was going to leak out?"

So I filled the bilges as much as possible instead...not as much water as the ballast tank, nor as low and centered, but better than nothing. I'll pull the ballast valve and replace the rubber disc with a new, fresh, low-durometer or foam rubber disc. 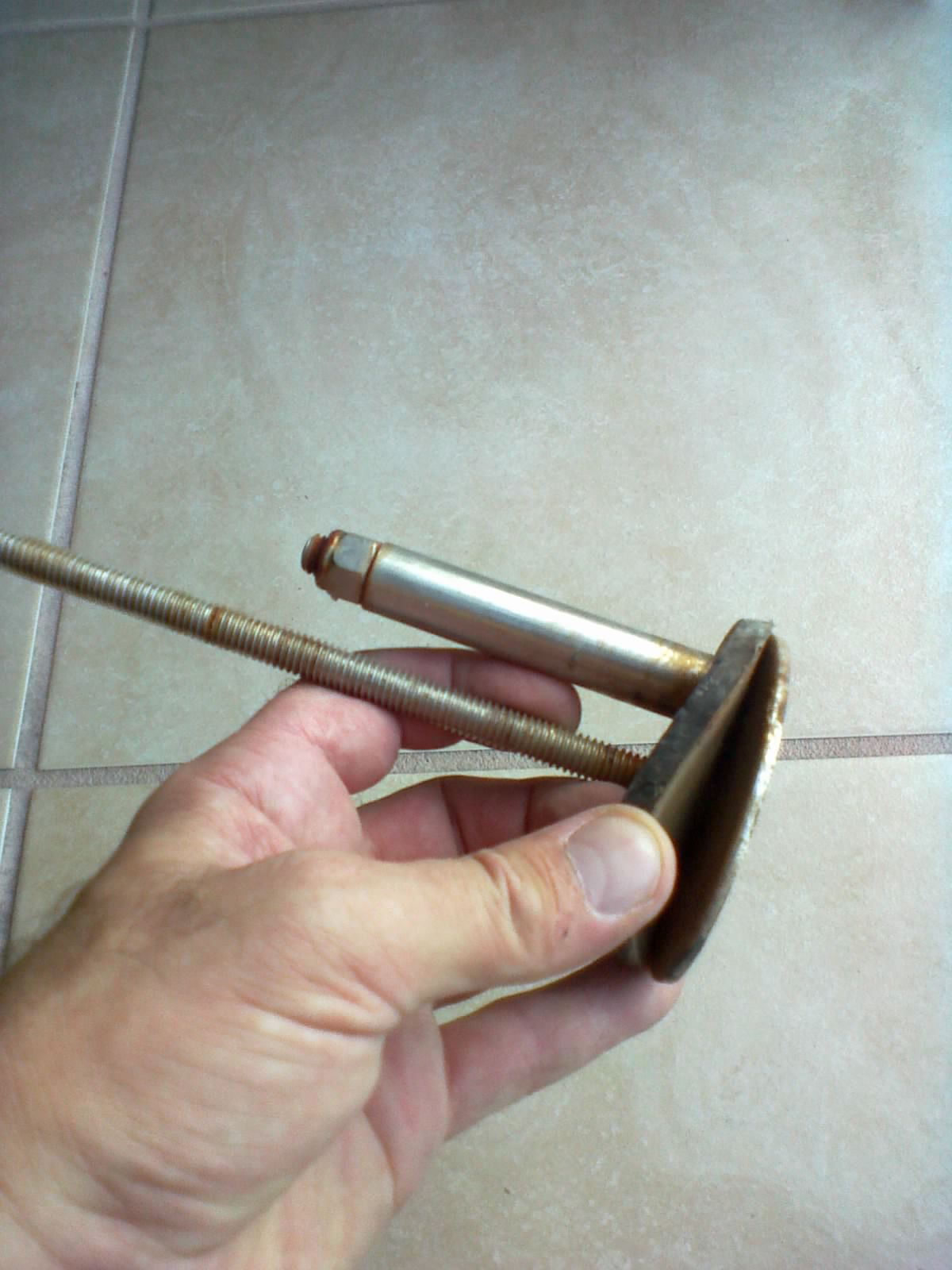 Glad that you guys got through it fine. I was thinking of you and the others that live year around down there.


vizwhiz wrote:....I'll pull the ballast valve and replace the rubber disc with a new, fresh, low-durometer or foam rubber disc.

I replaced mine with parts from BWY and don't think they were that expensive,

Sumner wrote:Glad that you guys got through it fine. I was thinking of you and the others that live year around down there.


vizwhiz wrote:....I'll pull the ballast valve and replace the rubber disc with a new, fresh, low-durometer or foam rubber disc.

I replaced mine with parts from BWY and don't think they were that expensive,

Thanks for thinking of us! I'd offer to go look at your boat, but it will be another week before I venture out to customers.
I'll check BWY. I didn't really think of them, was going to run over to the local rubber place and see if they had a drop piece they could offer.
Top

Same here! You Floridian Mackers have been particularly heavy on my mind this past week. So glad you dodged the bullet!
All the best
Top
Post Reply
58 posts