Use this forum to announce, plan, and discuss events, cruises, regattas, shows, sailing destinations, events your club is planning, etc.

We are planning a Lake Champlain trip this weekend. Plan is to arrive in Westport NY on Friday night and launch on Saturday. We are heading across the lake to Basin Harbor Club for a couple of days and on Monday we are planning a run down to Fort Ticonderoga, about 30 miles.

I'd like to make it there for the 11:30 a.m. musket firing. Does anyone know where/how to dock the boat at the Fort, and how long it will take to walk from the dock up to the Fort? Google was no help on this question.

We need a dock or a beach to disembark. I'm not planning to inflate the dingy, nor to swim

Not sure about your questions - we've not visited the southernmost points of the lake yet. We are up at the other end of the lake (Point Au Fer / Rouses Point) and will be there from this Sunday until the end of August, if you get a hankering to start farther north.
Top

You should contact the museum directly regarding the use of their dock and/or beaching along their shoeline.

Looking at Google Maps, I'd estimate the distance from their dock to the fort at no more than a half mile.
Top

I emailed the Fort yesterday and will call them today if I don't have a response. Google maps shows a small dock used for the fort boat trips, and there looks like there is room for a shallow draft X or two, near the shoreline.

I could always disembark the family and then anchor out, and swim in, but google also shows that it would be a very weedy swim.

We thought about heading north from Westport, to Valcour Island and Burlington, but we'll save that for next time. The Ticonderoga run will be the longest single leg we have ever done with the kids, at about 3 hours. If they can handle it, next year we will probably put in at Rousse's Point and explore the lake from top down, and say hi to K-Mc.
Top

Starscream wrote:We thought about heading north from Westport, to Valcour Island and Burlington, but we'll save that for next time. The Ticonderoga run will be the longest single leg we have ever done with the kids, at about 3 hours. If they can handle it, next year we will probably put in at Rousse's Point and explore the lake from top down, and say hi to K-Mc.

Righty right. PM me when you're planning the trip and we'll work out our meeting. We live right on the lake, at the very tip of Point Au Fer.
Top

We just put up the mast and enclosure in the Westport boat launch parking. We walked to the Westport Marina for dinner and are sitting looking out over the lake. There are two other macgregor sailboats at the docks of the marina, an X and an M.

We'll stay the night on the hard an launch tomorrow morning.
Top

Here are some highlight photos from the trip:

On the replica Philadelphia at the Champlain Maritime Museum in Vergennes.

This is an easy stop, either in Basin Harbor (docks, $$$) or North Harbor (moorings, could be free if visiting the museum, this photo was taken in North Harbor). It includes glassblowing workshops, iron working workshops, and a whole slough of historical artifacts, displays and movies. Well worth the $40 or so for the whole family to see. We were the first and only ones there this past Sunday, and that resulted in a "private" screening of a short movie, an animated tour of the Philadelphia with us and the docent only, and one on one interactions with the glassblower and blacksmith. Amazing.

And if anyone didn't see my recommendation on a different thread to look up the battle of Valcour Island, it's certainly worth the time to do so.

BTW, that Gunboat Philadelphia was 53 ft long and had a crew of 54. The canvas roof was held up by the oars. It had a firepit down low in the bilge for cooking, and pretty much no cover anywhere other than the canvas. My boys were curious as to where everyone would sleep, and the answer was "everywhere". Apparently they would sleep up on the canvas roof, exposed to weather. Tough people. The docent said that the museum tried an experiment of loading 54 men onto the boat to spend an overnight out on the lake, and that was apparently an incredible exercise in patience and tested many a friendship. Would be like having 25 people on the mac, more or less. And some cannons.

Those small cannons were called "swivel guns", and they could be lifted up out of their mountings on the side rail and installed on the appropriate side to fire on the enemy. The big cannons were more or less fixed and relied as much on maneuvering the ship as adjusting the cannon itself. The ship was square rigged and couldn't go to weather, or even across the wind at all under sail; it relied on the rowers.

That's the real "igniter" thingy son 3 is using to fire the gun that son 2 is aiming at me. Forget what it was called.
Top

Osprey? This one was perched high up in a tree overlooking Basin Harbor where we were docked. Just after I took the photo it "fell" off the tree and dove straight down, maybe 50ft straight into the water with a big smack/splash. I couldn't track it with the camera and was too excited to remember to take some action photos. It missed whatever it was going for. It tried again later on, and caught a big fish, which it struggled with in the water for some time before giving up and letting it go. 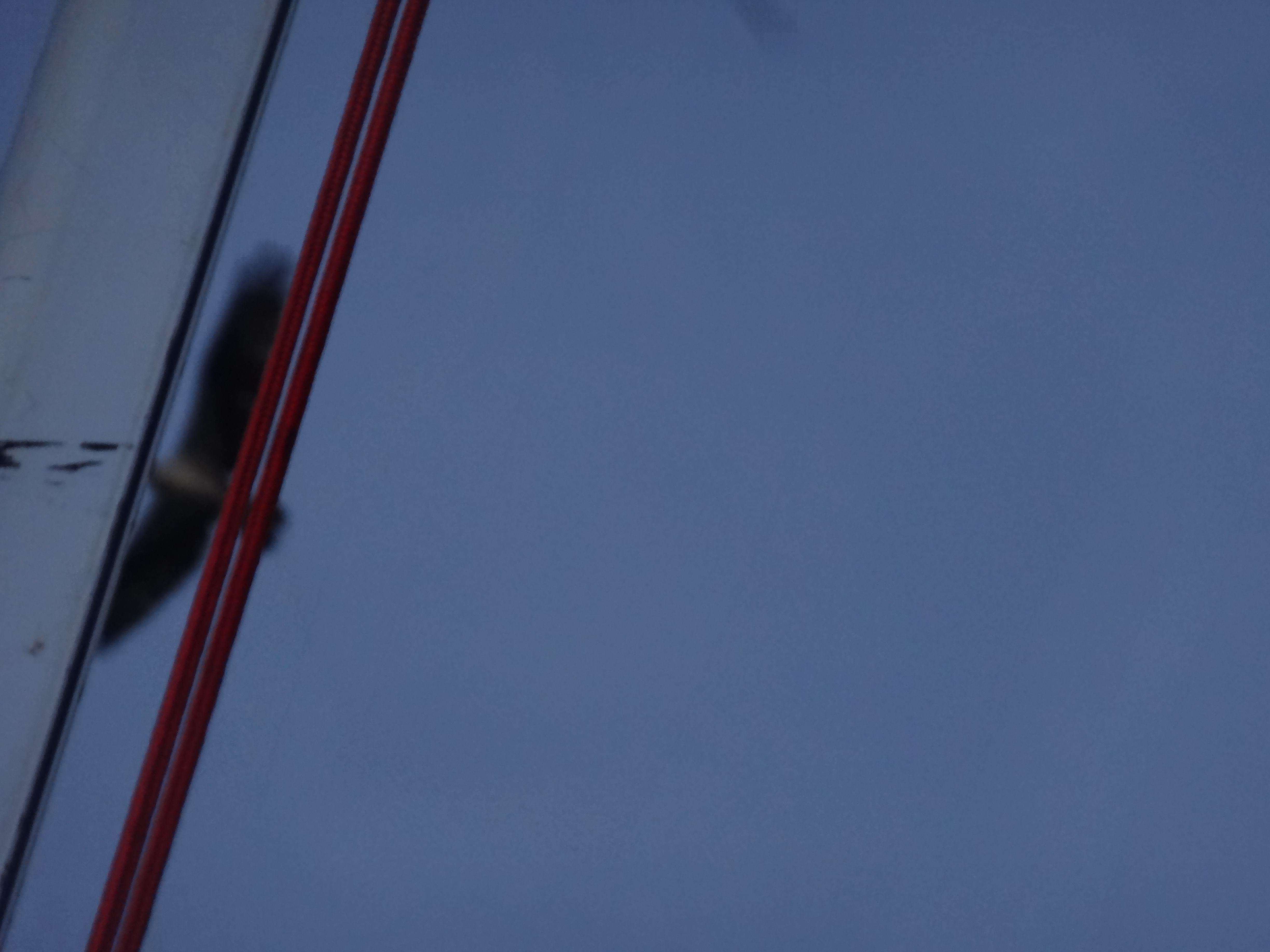 It gave our mast an empty-handed flyby as it left.
Top

Stayed overnight at the Basin Harbor Country Club. Was about $130/night for us, but included access to all the resorts facilities, including a huge heated swimming pool, beach with all the beach toys like paddle boats, paddle boards, sailing dingys, swim toys, ping pong, croquet, shuffleboard, showers and bathrooms, etc. Several reasonably priced restaurants are on the property as well, highlighted by the Red Mill restaurant located in a refurbished sawmill. I can't recommend it enough: it's expensive but it makes you feel kind of rich even though we were the "rabble" from the small boat hanging laundry off the lifelines. There is a small airstrip out back and a golf course (golf ain't my thing...). We had more fun overloading a paddle-boat with all of us, and fishing golf-balls out of the harbor.

Here's a view of the harbor: you can just make out Bear Hunt over on the left, dwarfed by a couple of 40 foot sailboats. Our mast looked like a stick compared to their tree-trunks. The dock is staffed by red-shirted dockhands, and gets down to about 2ft on the inside dock in the foreground: means they will always have room for a Mac in my opinion, even during the high season. I highly recommend it, to break up the dirt and heat and smell of Mac-camping. 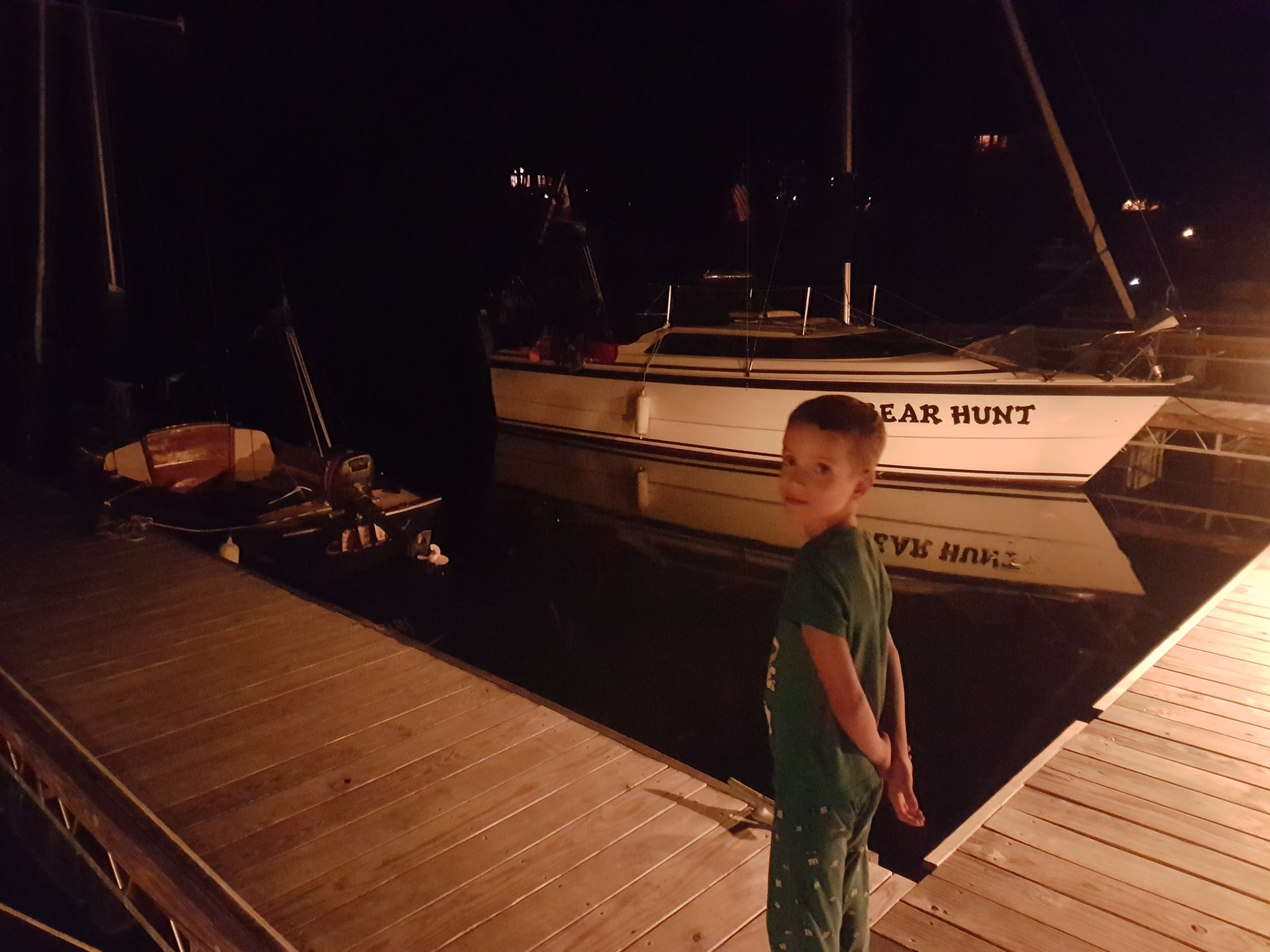 Walking back to base after a late night looking for Perseids. Saw a few good ones, but the shower was surprisingly sparse. We saw as many non-Perseids as Perseids, and several satellites too, of course.

A really nice place to visit, and about an hour's sail (10 minutes by motor) from Westport Marina, another nice place to stay.
Top

And, finally, no trip report would be complete without some sunsets..

Just FYI, the actual gunboat Philadelphia was recovered from Lake Champlain in the '30s and is presently on display in the Smithsonian's National Museum of American History.